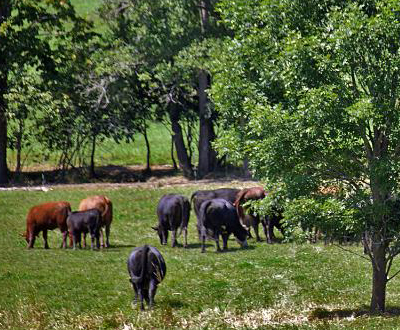 Feedlots typically add hormones to the feed of their grain-fed cattle to help them to grow larger, faster and be ready for harvest earlier. Generally, grass-fed cattle do not receive hormones.

In addition to hormones, another major concern about animals raised in feedlots is their susceptibility to diseases caused by eating a diet they are not accustomed to and being so confined in the feedlot.

Managing the spread of disease can be challenging, since animals move in and out of feedlots often. Some diseases animals contract can be passed on to humans who consume the meat, causing major concerns. One specific issue of concern is E. coli. When cattle eat grain, it makes their intestines more acidic, which promotes the growth of bacteria such as E. coli. If you eat under-cooked beef that has E. coli, it could kill you.

Because feedlots’ smaller spaces give way to the increased spread of diseases, it is common for antibiotics to be used in feedlots. Although grass-fed cattle can still get sick and require antibiotics, it is less common than the use of antibiotics to treat cattle in poor living conditions. Grass-fed diets also provide nutrients that boost the immune system and help limit the chances of needing antibiotics.

Overall, grass-fed cattle receive fewer antibiotics and hormones than grain-fed cattle. Understanding the process involved in creating the food you consume is an important step in making an informed decision about the food you eat.