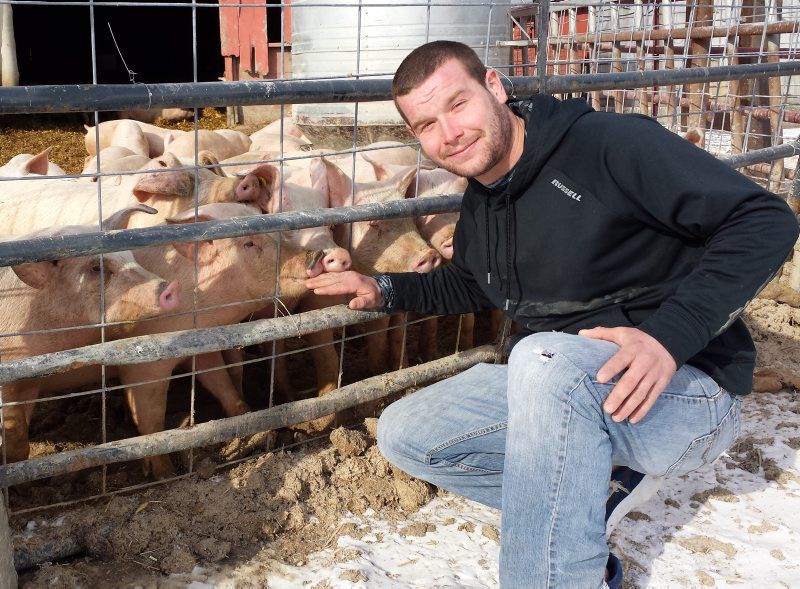 Here’s an article written by Paul Post, New York Correspondent, for Lancaster Farming in January of 2017…

FORT ANN, N.Y. — Simply Grazin’s upstate New York operation has quickly grown from two employees in 2012 to more than a dozen full-time staffers and several part-timers, with plans to add five more in 2017.

That’s not surprising considering the 1,000 pigs and 170 head of beef cattle that workers are responsible for at a pair of farms in Fort Ann and Hartford.

Owners Mark and Lynne Faille have a deep passion for not only preserving farmland, but keeping it in production, too. Recent approval of a state Farmland Protection Program grant is helping their dream become reality.

“Having land available for the future is at the heart of our mission, and we hope to be a partner in Washington County preservation,” Mark Faille said. “Keeping this area in a strong state of production agriculture is important to our company and the longevity of the farming community we are part of.”

The couple’s organic livestock operation is based in Skillman, Somerset County, New Jersey, near Princeton, where they farm 2,500 acres.

In addition to upstate New York, they have a third farm in LaCrosse, Virginia, right off I-85 and near the North Carolina state line.

The Failles own 517 acres in Washington County, New York, which borders Vermont. The two farms, only a few miles apart, are former dairies.

One is home to about 1,000 pigs. The other has 170 head of beef cattle, primarily Black Angus, Red Angus and Hereford.

“We have been in Fort Ann and Hartford for six years,” Mark Faille said. “We started farming in New Jersey 20 years ago, where we purchased our first farm in 1996. Before that, I owned a mechanical contracting business for 22 years.”

“We raise approximately 1,700 cattle,” Faille said. “That’s why preserving land is so important. These animals are all pasture-raised and rotationally grazed. That takes a lot of pasture.

“Our New York team spends most of the summer harvesting our forages to carry the cattle and hogs through the winter,” he said. “Fort Ann is the hub of our hog farrowing operation, farrow to finish. In our 240-foot converted tie-stall dairy barn, we have converted the milking parlor into farrowing pens to meet animal welfare and Good Agricultural Practice standards. Our mothers and piglets enjoy radiant heat in each pen with plenty of room to stretch out.”

Pigs are fed hay produced on-site and certified organic feed from Cold Springs Farm in Sharon Springs. In summer, they go out on pasture.

Farm employee Matt Devlin said plans call for raising sorghum Sudan grass this year. Originally from the Princeton, New Jersey, area, he became acquainted with the Failles through a farmers market and began working for them a short time later.

Rural Washington County’s wide open landscape, with views of Adirondack Mountain foothills, is quite a bit different from where he grew up, just north of Philadelphia. But he likes the work and lifestyle.

Mark Faille said, “The benefits of organic production are too numerous to list, but include a healthier Earth, air, water, animals and people.”

There are challenges with this type of farming, too, such as competition for land and organic services infrastructure, he said.

Each Simply Grazin’ location is vital to its overall mission of farm preservation and providing local organic proteins.

Doing business in three different states, at sites quite distant from each other, is a unique situation. Washington County is about 200 miles from New York City.

“The benefit is diversity,” Faille said. “Each state has its pros and cons. New York offers a lot of incentives for new business, especially agri-businesses. And we like the direction the governor is taking to increase business in New York.”

The Cuomo administration has advanced a number of steps to promote various segments of upstate New York’s agriculture industry. Separate initiatives have been designed to promote craft beverages, and wine and distilleries; yogurt and dairy; and a program aimed specifically at getting more locally produced food in schools and others institutions.

The Simply Grazin’ grant is one of four totaling $2.4 million that will protect 1,540 acres on four farms. Three are in Rensselaer County, Washington County’s southern neighbor. They are:

• 513-acre Copses Farms, a 250-head Black Angus feeder operation that is in the process of expanding to include a 600-head organic dairy. It is owned by Eric and Maureen Mayer in Schaghticoke and Pittstown.

• Schmidt Farm, a 217-acre beef cattle operation located along the Tomhannock Reservoir in the towns of Schaghticoke and Pittstown.

• Wagner Farms, a third-generation family owned dairy located near Troy in the towns of Poestenkill and Brunswick.

The awards were obtained with help from the Greenwich-based Agricultural Stewardship Association. Since its inception, in 1990, the ASA has helped to conserve 17,000 acres on 109 properties for agricultural purposes in perpetuity in Washington and Rensselaer counties.

“The work ASA does in helping to protect farms in Washington and Rensselaer counties is important to preserving the agricultural businesses and landscape we have in this area,” said Patricia Lockwood, president of Washington County Farm Bureau. “The products and jobs tied to agriculture within these counties play a significant role in our local economy.”

Cassie Fedler, chairwoman of the Washington County Agricultural and Farmland Protection Board, said: “This is a true benefit to the agricultural community of Washington County. Not only are we able to conserve some of our rich agricultural history and land, but it also serves to strengthen the viability of current generations as they move to the future.”

You can find the original article post at https://www.lancasterfarming.com/news/northern_edition/multistate-farm-plants-long-term-roots-in-new-york/article_2d8ff713-8c3b-54ed-82b3-0859c3ec9145.html