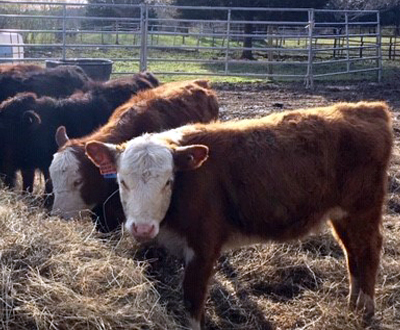 Here’s an oldie, but goodie as posted in The Star-Ledger by Anothony Venutolo on March 26, 2008…

As grilling season approaches, here’s a question for you: What did your steak eat for dinner?

If you believe that we are designed to eat meat, yet you want to be a conscious carnivore, it’s a question that has heft.

Until the mid-20th century, the vast majority of American beef was pasture raised and fed a diet of native grasses. That’s not the case today, when most beef served in restaurants and for sale in supermarkets comes from grain-fed cows warehoused in feedlots, or “Confined Animal Feeding Operations,” (CAFOs).

According to “The Prairie Table Cookbook,” (Sourcebooks, Inc. $29.95), during World War II, the U.S. government gave surplus corn to ranchers to feed to their cattle. The ranchers quickly discovered that grain-fed animals bulked up quicker, allowing them to go to market at 14 or 15 months instead of four or five years. That accelerated market cycle translated to profits, and the American cattle industry never looked back. But there’s one big problem. Cows can’t digest corn.

Cows, like other grazing animals, are ruminants, which means they have a rumen, or 45-gallon sized stomach that ferments grass, converting it into protein and fats. Ruminants are not physically equipped to digest grain. Switching a cow from grass to grain opens the floodgates to a host of serious maladies, including the presence of E. coli, which only a constant diet of antibiotics can begin to counter.

Author Michael Pollan, who chronicled CAFOs in an article titled “Power Steer,” reported that conventionally raised cattle are frequently served cow blood and chicken droppings. Add in the use of growth hormones and the presence of animal byproducts in feed, and the stage is set for scenarios like the recent recall of 143 million pounds of contaminated beef, some of which was used in school lunch programs.

“Giving cows corn is like putting diesel in your gasoline powered car. It’s wrong, wrong, wrong,” said Bill Kurtis, who along with food historian Michelle Martin authored “The Prairie Table Cookbook.” Kurtis, a television network newsman for 30 years, bought a 10,000-acre ranch in his home state of Kansas when he retired and eventually started raising Aberdeen Angus cattle. Kurtis didn’t think he had any choice but to corn feed his cows, which he raised to nine months before selling them to feed lots.

“But I started reading up on the whole business, and that’s when I discovered the option of grass feeding,” he says.

In 2005, Kurtis founded Tallgrass Beef (www.tallgrassbeef.com) and committing to pasture raising his herds on a diet of native grasses. “All of the problems go away. I mean all of them.” Kurtis, one of the pioneers in the burgeoning grass fed movement, believes that, while grass fed beef will always be an alternative, it’s one that is catching on “like wildfire.”

“Used to be I’d have to give a PowerPoint presentation because potential customers didn’t know what I was talking about,” said Kurtis. “Now, they do.” He sells to celebrity chefs like Rick Bayless and Charley Trotter, along with supermarkets and gourmet stores in the Chicago market.

As is usually the case with significant food trends, chefs at better restaurants are driving the return to pasture raised beef. For Michael Haimowitz, executive chef at Arthur’s Landing in Weehawken, featuring grass fed beef and other types of heritage meats on his menu isn’t just about giving diners a choice. He sees it as his responsibility.

“As a chef, I need to think about the impact of what I’m buying and how it can affect the market,” he said. “If I create an awareness of sustainable seafood, organic produce and pasture raised beef, then I’m fulfilling my responsibility as a chef.”

Although he pays more for grass fed beef, there is also less waste and better yield pound for pound. Haimowitz uses an Australian product that is produced by a consortium of family farms and sold through the Newark-based gourmet food purveyor, D’Artagnan. “There’s also the long-term benefit to the environment that comes with reclaiming pasture land and cutting the use of fertilizers and pesticides. It’s really the only sane choice.”

For Mark Faille, owner of Simply Grazin’ farm in Skillman, not far from Princeton, raising grass-fed cattle was initially something he did for his family. After losing an infant daughter to what he suspected were complications related to food-borne chemicals, Faille, 44, decided he was going to raise and grow everything that went into his family’s mouth. Although he didn’t know the first thing about farming — he’d previously owned a residential high tech heating business — Faille bought a run-down farm and got busy.

“Nobody could explain to me why I had to give the animals grain, so I determined on my own that they didn’t need that to survive. I had no preconceived ideas or bad habits to undo,” said Faille.

He did everything himself, from raising chickens for eggs and meat to vegetables and harvesting his own cattle. Soon friends and neighbors and area restaurants wanted to buy from him. What started as a small family subsistence farm has grown into a business, one that starting in April will supply Whole Foods markets in New Jersey with Simply Grazin’ grass fed beef.

“We’ll make a profit this year, for the first time,” said Faille, who now raises cattle on 220 acres in Skillman and another 200 acres in Hunterdon. He and his fiancee also operate a small retail store that carries organic veal, beef, pork and chicken all raised in a chemically free environment, free range, pasture grown, with no growth hormones, antibiotics or steroids ever used.

What does it cost to be a conscious carnivore? More than picking up $.99 a pound ground beef at the local supermarket.

“Our ground beef is $8.50 a pound,” said Faille. “But I can tell you that the beef you purchase comes from one animal, and I know that animal’s name, date of birth, sex and where he was processed. You can’t get that for $.99 a pound.” Faille’s beef is processed at Bringhurst Meats in Berlin, the only federally inspected, certified organic processor in New Jersey. One way to pare the price is to commit in advance to a share of an animal, an arrangement you can make directly with the farmer.

As to the taste, there is a difference between corn fed and grass fed beef. “Yes, corn fed is tender and has more marbling,” said Kurtis. “But it also can be bland. Grass fed beef is the way beef was meant to taste, nutty, slightly sweet and juicy.” The flavor of grass fed beef has improved, as ranchers like Kurtis have committed to raising heritage breeds such as Black Angus, Red Angus and Hereford, all raised on grass for thousands of years.

Because grass fed has less fat, it’s best cooked at lower temperatures rare to medium rare, to preserve its natural juices. And because it’s leaner, it’s also better for you. A six-ounce grass-fed steak has about 100 fewer calories than its grain-fed counterpart. If you are like most Americans, who consume an average of 66.5 pounds of beef a year, switching to grass-fed lets you skip 17,733 calories annually. Grass fed beef is also rich in Omega-3s, the “good fats” commonly found in fish, along with another type of potentially good fat called conjugated linoleic acids, or CLAs.

So bottom line, grass fed beef costs more. But it’s better for you and your family, better for the earth and better for the animal. Why not give grass fed beef a try, and lose the side of guilt that is sizzling alongside the corn fed steak on the barby. If you’re trying to be a savvy meat eater, it’s one serious choice to make.